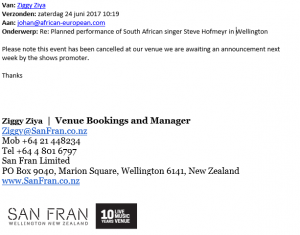 A Wellington, New Zealand, venue where one of the Afrikaans is Lekker 2017 concerts was due to take place, has cancelled amidst protests from African-European Indaba (AEI). AEI and a South-African expat sent information regarding the rightwing and racially controversial singer, Steve Hofmeyr, to the venue. They declined to provide a reason for the cancellation.

“It is important for reconciliation in South Africa that we as Afrikaans speaking South Africans, especially those who benefited from apartheid and white privilege, are seen to speak out against actions which we believe may be damaging relations with fellow citizens” Johan de Villiers, AEI’s founder said from their offices in Amsterdam, Netherlands. “With Hofmeyr’s history, we find it unacceptable that he will be sponsored to represent our language abroad without anyone protesting the fact. We have an interest and responsibility in building our country together.”

An email was received by AEI from the office of the mayor of Adelaide, Australia, where Hofmeyr is also due to perform, stating they are currently considering whether the concert should go ahead in the Adelaide city hall.

Hofmeyr, who, among other statements and actions, blamed apartheid on South African black people and who called the late Eugene Terreblanche, a well known white supremacist, a “cultural icon”, has faced several cancellations of sponsorships and venues cancelling when they learn about his rightwing and insulting statements.

“We firmly believe in the freedom of association, but we also believe venues and residents of cities have the right to be informed on who will be associated with their venue or city.” De Villiers said. “We as the Afrikaans speaking community must be seen speaking out against any actions and statements we do not want to be associated with. Too many people are quiet. And Hofmeyr is well known for speaking his mind about many people and on many subjects. We claim that right as well.”

Hofmeyr was the celebrity speaker at the launch of a whites-only political party in 2016 as well as the main speaker at a 2016 far rightwing gathering in Pretoria, on both he shared the stage with a known white supremacist. On both occasions Hofmeyr led those present in singing the apartheid-anthem.

“Hofmeyr should apologise for his statements and publicly distance himself from the white supremacists he is associated with.” De Villiers said.

South African Tumi Morake: A Target for Stating a Fact

12 Powerful Quotes Against Racism You Need To Read