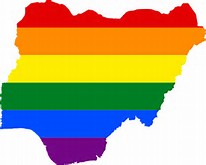 In an effort to change public perceptions about lesbian, gay, bisexual and transgender (LGBT) Nigerians and support their rights, a photo exhibition that highlights their experiences and challenges was recently opened in the country’s commercial capital, Lagos, Africanews reports.

Dozens of Nigerians showed up at the event to view photographs of survivors who had suffered stigma, sexual abuse and violence.

The photographs show LGBT people dressed in long robes, a reflection of the fact that many have to constantly keep hiding their sexual orientation or gender identity because of fear of intimidation.

The Initiative for Equal Rights and Stand to End Rape advocacy groups decided to showcase LGBT Nigerians in a way that had not been previously done in a country that upholds a same sex marriage prohibition act. Read the full report here