After Rapport newspaper reported that the prestigious Nederburg wine estate performance of far rightwing singer, Steve Hofmeyr was cancelled, the Strand Golf Club stepped in to host Hofmeyr on the evening. The Nederburg event organisers were informed of a campaign in The Netherlands which would have informed Dutch consumers of Nederburg’s willingness to host Hofmeyr. Scott Entertainment then arranged an urgent meeting with African-European Indaba’s Johan de Villiers at their Paarl offices and subsequently cancelled the event.

African-European Indaba (AEI) contacted the President of the Strand Golf Club committee, Mr Wernher Bock, and the management of the golf club and is awaiting their response as to why they would give Hofmeyr a podium to sing the apartheid anthem and make his racially provocative statements.

Johan de Villiers of African-European Indaba said they were approached by members of the public and residents of The Strand who objected to Hofmeyr’s concert being moved from Paarl to their town.

“Since 2012 we have launched a campaign in Europe to prevent rightwing individuals and organisations spreading their propaganda unopposed at European institutions and venues.” De Villiers said. “In 2012 a proposed one-sided motion before the Dutch parliament was successfully prevented from being passed. Then Kallie Kriel of Afriforum and Koos Malan from the University of Pretoria were the advisory guests of the far rightwing Dutch party, the PVV, who last year also hosted Hofmeyr. Since then we have opposed half-truths and one-sided statements in The Netherlands, in Brussels at the EU-parliament, at the UN in Geneva, etc. and we made venues aware of who they are giving a podium too. In some cases the venues refused to host Hofmeyr specifically based on the facts provided to them. You cannot seperate Hofmeyr the singer from Hofmeyr the far rightwinger. It is therefor very dissappointing that a sports club who obviously supports transformation and whose management and board are leaders in a transforming multi-cultural community, would be so shortsighted as to replace Nederburg as a venue. Unbelievable really.”

Even when events do actually continue in spite of appeals to venues to reconsider, African-European Indaba continues to put pressure on individuals who performed with Hofmeyr. The supporters of Dutch musician, Stef Bos, and others who performed with Hofmeyr at the Rust en Vrede wine estate in January 2017, will also be informed of the artists’ unwillingness to distance themselves from Hofmeyr’s racially provocative statements.

Our Cape based volunteers will be contacting staff of the Strand Golf Club with an information sheet on Hofmeyr. 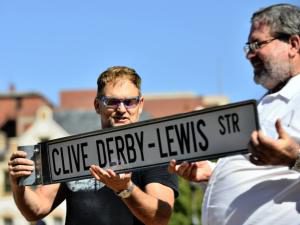 Photo: Hofmeyr wants a street to be named after Clive Derby-Lewis, the rightwing politician who was sentenced to life imprisonment for his role in the assassination of Chris Hani. He praised Derby-Lewis as a hero at the time of his death recently. 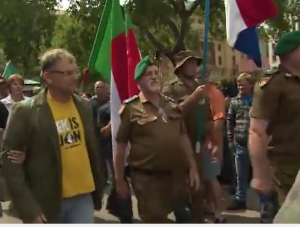 Photo: Hofmeyr sharing the stage with white supremacist “Colonel” Franz Jooste, famous for his statements calling black people “barbaric” and organising training camps for white teenage boys “preparing them for a racial war” and using the current South African flag as a doormat. 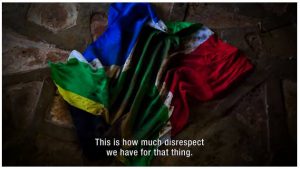 Photo: Scene from a documentary on Franz Jooste. 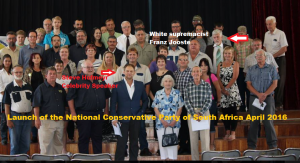 Photo: Hofmeyr as the celebrity speaker at the launch of the Whites Only National Conservative Party. Once again sharing a stage with the white supremacist, Franz Jooste. 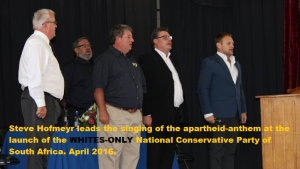 Due to these and other far rightwing and racially provocative actions by Hofmeyr, venues, organisations and other artists have avoided being associated with him. Recently the highly respected singer David Kramer refused to share a stage with Hofmeyr at the Rust and Vrede wine estate.

“We hope the Strand Golf Club will take this into consideration.” Johan de Villiers said from the AEI office in Amsterdam. “If they are willing to be the host for Hofmeyr, it is their right, but we will most definitely remind the entire Strand and Helderberg community of it for the forseeable future.”